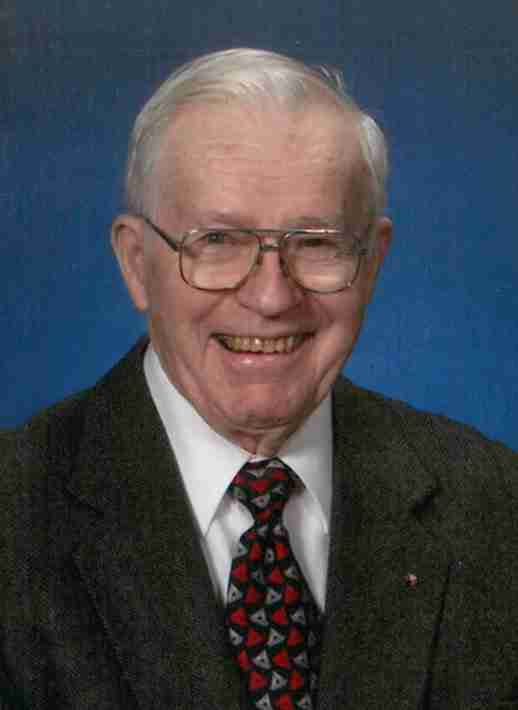 A private family Mass of Christian Burial for Jerome will be held at Holy Name Catholic Church in Rockford with Father Ralph Davis officiating. Burial will be at Calvary Cemetery in Charles City, Iowa.

Visitation will be at Hauser Weishaar Funeral Home in Charles City from 5:00 to 7:00 p.m. on Monday, June 29, 2020. Those in attendance will be asked to follow social distancing guidelines and to please wear a face covering, thank you for your understanding.

Jerome Neal Schlader, the son of Virgil and Gladys (McCarville) Schlader, was born October 7, 1923 the oldest of nine children at the family home near New Hampton, Iowa. He was educated in Floyd, Iowa and graduated from Floyd High School in 1941. After graduating he helped a family neighbor farm before enlisting in the United States Navy. Jerome proudly served his country for almost two years during World War II as a Clerk on Treasure Island in San Francisco before he was honorably discharged.

On April 15, 1950, he was united in marriage to Lenore Elbert at Immaculate Conception Catholic Church in Charles City. The couple made their home in the Charles City area where Jerome was a dairy farmer. The family settled in the Rockford area in 1960 and continued dairy farming.

Jerome was a member of Holy Name Catholic Church in Rockford (serving as custodian for several years after retirement), Knights of Columbus (4th Degree Knight), the NFO (National Farmers Organization) and was a 4-H Leader for many years.

Jerome enjoyed fishing, playing cards (solitaire, bridge and 500), cracking walnuts, gardening (vegetable), putting jigsaw puzzles together and going to the casino on occasion. He loved his family very much and looked forward to time spent with them all.

The family would like to give special thanks to Floyd County Home Health in Charles City and the nurses in the Emergency Room and on 4East at MercyOne North Iowa Medical Center in Mason City for their professional care and kindness.