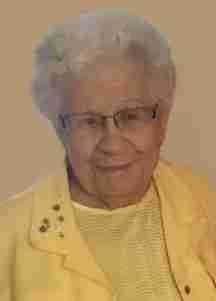 A memorial service for Phyllis Bunn will be held at 1:00 pm on Saturday, October 20, 2018 at Hauser Funeral Home with Pastor Norman Bauer from Saint John Evangelical Lutheran Church officiating. Inurnment will be at Sunnyside Memory Gardens in rural Charles City.

A gathering of family and friends will take place one hour prior to the service at Hauser Funeral Home on Saturday.

Phyllis Erma (Martens) Bunn, the daughter of Arthur and Elfreda (Stock) Martens, was born on January 31, 1926 in Charles City, Iowa. Phyllis attended schools in Charles City and graduated in 1947. She was united in marriage to Mason Bunn on August 16, 1947 at Saint John Evangelical Lutheran Church in Charles City.

Phyllis was a great mom and homemaker. She had various jobs as her children got older, but always cherished her job as a mother and grandmother. She was a member of the VFW, Senior Center, and Saint John Evangelical Lutheran Church. Phyllis enjoyed shopping, reading, playing cards (especially 500), and playing games with her grandchildren.

She was preceded in death by her parents, husband, sister, Mary Lou Bard, and son-in-law, Denis Bonwell.