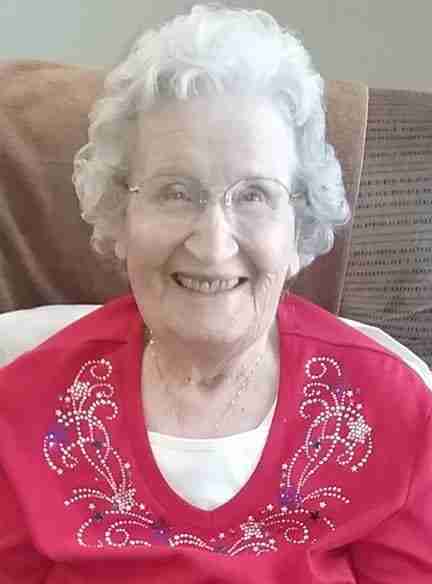 A funeral Mass for Margaret Gleason will be held at 10:30 a.m. Friday, March 16, 2018 at Immaculate Conception Catholic Church with Reverend Gary Mayer celebrating the Mass. Burial will be at Calvary Cemetery in Charles City.

Visitation will be at Hauser Funeral Home from 5:00 to 7:00 p.m. Thursday, March 15, 2018, with a Scripture Service starting at 7:00p.m. Visitation will continue one hour prior to the service on Friday at Immaculate Conception Catholic Church.

Margaret “Peggy” Mary (Gilbaugh) Gleason, the daughter of Roy and Marie (Sanftner) Gilbaugh, was born May 9, 1924 in Graettinger, Iowa. She graduated from Graettinger High School, where she lettered in girls’ basketball all four years. On January 4, 1947, Margaret was united in marriage to Edmund Gleason Sr. at Immaculate Conception Catholic Church in Charles City, Iowa. This union was blessed with six children.

During World War II, Margaret worked at the munitions plant in Ankeny. She also worked as a lab assistant at Salsbury, a cabinet shop, and at Ray’s Pizza Factory. She especially valued her work as a home health aide. Margaret and Edmund volunteered to deliver Meals on Wheels for many years. She was a member of the Saint Rosa of Lima Circle, Women’s Auxiliary at the VFW and the women’s bowling league. She enjoyed playing cards, golfing, fishing, sewing, and dancing with her husband. Her greatest joy was spending time with her family.

She was preceded in death by her parents; husband, Edmund Gleason Sr. in 2009; son, Steve Gleason in 2017; brothers: Lawrence, Harold, and Russell; and sisters: Lucille and Penny.

In lieu of flowers, memorials can be directed to the family.

Update: Osage man who assaulted man with knife gets 90 days in jail