He’s inclined to support it even though it’s not exactly what he’d like to see.

Grassley stopped in Charles City at Diversified Fastening Systems Wednesday morning as part of his 99 county tour and yielded questions.

The most common topic was “when will the government reopen?”

He says negotiations with house leaders and the president is the only way to end the 32-day shutdown.

President Trump’s proposal would open the government through Sept. 20 while providing $5.7 billion for a border wall and give temporary deportation protections to one million unauthorized immigrants.  It also contains changes to the nation’s asylum rules.

Grassley says if the 60 votes aren’t there he can’t give a definitive answer on what it would take to open the government.

He also commented on trade by saying an agreement with China and the U.S. could potentially come after the countries drop tariffs.

He’d like to curb the president’s power on tariffs. 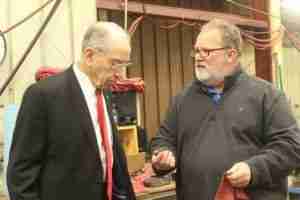 He cancelled his Thursday and Friday stops to fly back to Washington to vote to end the shutdown.